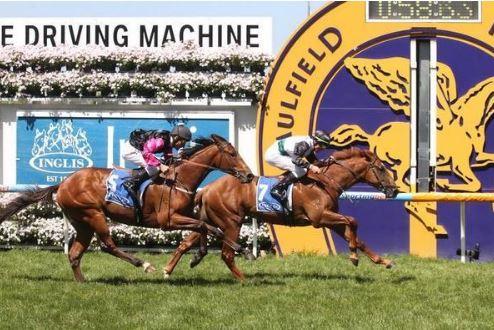 A magnificent win for Moonlight Hussler in the listed Debutant Stakes at Caulfield with his connections now eyeing off the $2 million Jeep Magic Millions 2YO Classic in January.

A $42,500 purchase from this year’s Magic Millions Adelaide Yearling Sale, Moonlight Hussler overcame the outside barrier in the feature to score a great win.

Moonlight Hussler was bred at Arrowfield Stud and sold at the Morphettville auction by Glenelg Park on their behalf.

“We got him for $42,500 as a yearling so he has already paid for himself with this win,” Hayes noted.

“He’s a very sound, tough colt so I might give him another start in the Maribyrnong Plate at Flemington during the Cup Carnival and then set him for the Magic Millions.”

Now based at Angaston’s Cornerstone Stud, Hussonet is the sire of Australian based Group One winners Weekend Hussler, Eagle Falls and Gold Trail.

He is from the Sydney winning Redoute’s Choice mare, a half sister to the Reginald Allen Handicap placegetter Miss Shamardal.

Moonlight Hussler’s dam is none other than champion mare and grand producer Fanfreluche.