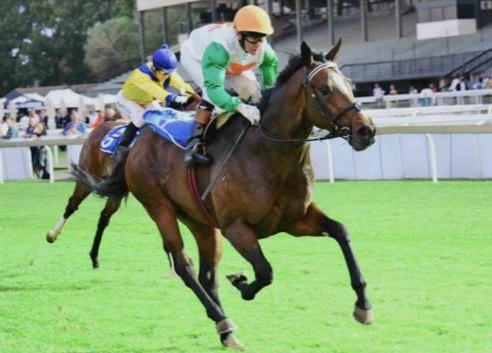 Glenelg Park has struck at Group 1 level for the first time with Harry’s Son in South Africa. The Euroa-based nursery sold him for $60,000 at the 2013 Gold Coast Magic Millions.

Harry’s Son (2c Haradasun – Dash On Ruby by Anabaa) captured the G1 Premiers Champion Stakes (1600m) at Greyville on Saturday. He had won on debut at Scottsville in January and followed up with Group 1 placings in the Golden Horseshoe and Gold Medallion.

“He has been unlucky,” trainer Paul Lafferty commented. “But I think this proves he’s the best two year-old in the country.”

Glenelg Park’s first juvenile winner of this season was Moonlight Hussler (Hussonet) in the LR Debutant Stakes at Caulfield. He cost David Hayes $42,500 at the 2013 Adelaide Magic Millions.

The highlight from Glenelg this year was a $190,000 Denman – Qualia yearling filly that has been exported to Japan. She was sold to the Big Red Farm at the Inglis Melbourne Premier Sale.

Harry’s Son is the first Group 1 winner by former Coolmore Stud sire Haradasun who was transferred to Grangewilliam Stud in New Zealand earlier this year. His dam Dash On Ruby won 6 races in Brisbane and her Rock Of Gibraltar 2yo Rock Of Arts won the Emperors Palace Ready to Run Cup at Turffontein last season.

Glenelg Park is a family owned business operated by Danny and Sarina Swain and is set on 220 acres among the Balmattum Hills near Euroa.