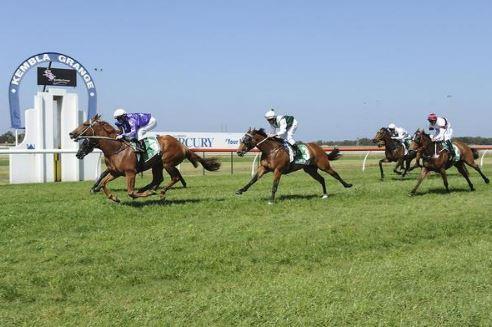 After two brilliant trials, the striking chestnut filly Zindzela (Magic Albert x Lebombo) survived a betting drift to win nicely on debut at Kembla Grange on Saturday. The filly made it four wins for the stable for the day spread over two states and three tracks.

Adam Hyeronimus bounced the filly out of the barriers nicely, and before too long, the daughter of Magic Albert was up the front travelling nicely. The race chopped and changed a little bit, and there was a lot of pressure on the filly at the front of the field. She saw this early pressure off without a fuss and for most of the race Zindzela moved very nicely and very efficiently. In the home straight Adam looked for the best ground, and upon finding it, the filly picked up again beautifully and won nicely.

Sometimes fillies simply need time. This filly could not get out of her own way around January / February, then all of a sudden the penny dropped, she won two nice trials and now she is a maiden winner with still plenty more to offer. This race on Saturday was over 1000m and although she won well, she might not just be a sprinter. She appears to be a very versatile filly. We will have to see what happens in the coming days, but it would be no surprise at all if she quickly gets over a little more distance.

Zindzela had all the attributes as a young horse that are synonymous with a Gai Waterhouse early preparation.

Congratulations to all the owners of this filly. She has taken a while to get to the track, but her confidence is up now and with a bit of luck she will get to bigger and better things in the not too distant future. Well done also to Adam Hyeronimus on a very confident ride. Adam was on the best horse in the race and he rode accordingly.